Thanksgiving, a time for family and friends to gather together, share thanks and enjoy a delicious feast. But did you know that the week of Thanksgiving is also dedicated to bringing awareness to a disease that affects one out of five Americans?

That disease is Gastroesophageal Reflux Disease (GERD).  Also known as acid reflux disease, GERD is a condition of the digestive system which has increased significantly in recent decades.

GERD is also a primary risk factor for esophageal cancer, the fastest growing cancer in the United States.  Esophageal cancer, similar to GERD, has also increased significantly in past decades.  In fact, incidence of esophageal cancer has risen over 600% and with an overall five-year survival rate of 17.5%, is among the deadliest of cancers.

Click here to learn how you can help spread awareness of GERD Awareness Week!

n Diego, CA, based Internet healthcare company focused on helping people suffering from GERD, has teamed up with The Salgi Esophageal Cancer Research Foundation, a nonprofit charity located in Rhode Island, to bring awareness of the dangerous link between GERD and esophageal cancer.

GERD occurs when the lower esophageal sphincter (LES) is weakened or damaged.  “The function of the LES is to act as a gatekeeper, opening to allow food to pass into the stomach and then closing to prevent the contents of the stomach (food, acid and other secretions) from back flowing or refluxing into the esophagus,” Bruce Kaechele, founder of RefluxMD states.

Heartburn, a common symptom of GERD, does not typically cause major concern, as billions of Americans experience it at some point in their lives.   However, persistent heartburn which occurs two or more times a week should not be taken lightly. 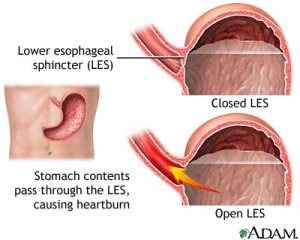 Some lifestyle changes can help to manage GERD symptoms, including avoid eating at least three hours before bed, stay upright after meals, lose weight, moderate exercise and avoiding certain foods that trigger symptoms.  Surgery may be an option for some patients.  Kaechele warns that “GERD is a progressive disease and can worsen if not treated properly.”

President of The Salgi Foundation knows all too well the dangers of acid reflux.  “My father suffered from chronic acid reflux for years and was never warned by doctors of any possible risks.  We never knew how much damage his reflux was causing until it was too late.” She continued, “My father passed away a little over a year from the time he was diagnosed with esophageal cancer.  It was and still is devastating.”

Many chronic heartburn sufferers turn to antacids or other over-the-counter medications for relief.  Others seek help from their doctors and are prescribed medications known as Proton Pump Inhibitors (PPIs), which reduce the amount of acid in the stomach; treating the symptoms of GERD but not the disease.  Many PPI medications no longer require a prescription and can be purchased over-the-counter.

A recent poll conducted by RefluxMD concerning PPI medications showed that the majority of patients who were prescribed PPIs by their doctors were never told that the medications “only treated symptoms, but that reflux would continue and the disease could progress,” and were also never told that “there were potential negative side effects (e.g. osteoporosis, bacterial infections, etc.”)

According to RefluxMD, PPIs are overprescribed.  “Research has proven that over 30% of daily PPI users are not refluxing.  Although long-term use of PPIs daily may reduce or eliminate symptoms; they do not stop the flow of stomach contents into the esophagus.  Consequently, GERD can progress and potentially lead to serious complications, such as Barrett’s esophagus or esophageal cancer.”

It is important to never stop taking any medications until you have spoken to your doctor.

In addition to GERD, other risk factors associated with esophageal cancer include obesity, poor nutrition, tobacco use, excessive drinking and Barrett’s esophagus.  Unfortunately esophageal cancer has few, if any, early symptoms.  Symptoms such as difficulty swallowing, chronic cough or hoarseness, food getting stuck or choking while eating often occurs once the cancer has spread and reaches an advanced stage.

Since there are currently no routine or standard screenings to detect esophageal cancer in its earliest stages, The Salgi Esophageal Cancer Research Foundation encourages those who may be at risk to be proactive and get screened as early as possible to see if there is any damage.

RefluxMD and The Salgi Foundation urge people to “Never ignore frequent heartburn and never rely on medications alone. Talk to your doctor about all of your options, especially how you can get screened for any possible damage.”

Click here to learn how you can help spread awareness of the dangerous link between chronic heartburn and acid reflux.

The Salgi Esophageal Cancer Research Foundation: A 501(c)(3) nonprofit charity established in Rhode Island. The Salgi Foundation’s mission is to raise awareness, encourage early detection and to fund research of esophageal cancer in hopes of a cure.

RefluxMD: A San Diego-based RefluxMD believes there is a better way to treat reflux disease. The Internet healthcare company has partnered with leading reflux specialists to champion a new approach to more effectively treat reflux disease patients and to create tools that help patients take control of their treatment. RefluxMD is designed to be a complete, personalized reflux resource. Visit: www.refluxmd.com

This entry was posted on Thursday, November 13th, 2014 at 11:17 am and is filed under The Salgi Foundation - Esophageal Cancer Awareness, Early Detection & Research. You can follow any responses to this entry through the RSS 2.0 feed. Responses are currently closed, but you can trackback from your own site.