Earlier this year, Johns Hopkins School of Medicine published a new study in which they claim and have been reported by the news media as claiming that the majority of cancers are due to “bad luck.”  They have more recently come back to address the concerns and questions that generated due to their initial statements.

Esophageal cancer was included in the study of 31 cancer types and was also mentioned in a diagram that came with the press release from Johns Hopkins. 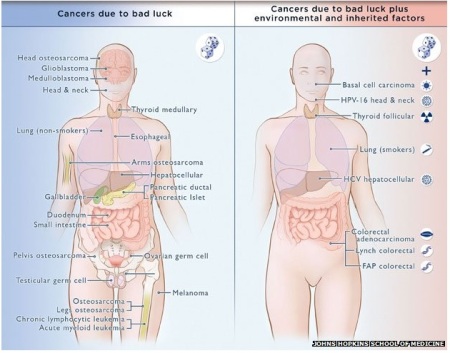 At first look, we became quite alarmed.

For years, we have explained the dangerous risk factors associated with esophageal cancer and the importance of early detection to improve the chances of survival; which are currently grim.

There is substantial research which proves that factors including, but not limited to: chronic heartburn, obesity, tobacco use, poor nutrition and excessive drinking can increase the risk of developing esophageal cancer.

Esophageal cancer should not be categorized as “bad luck.”

These statements have the potential to bring us leaps and bounds backwards in this mission to raise awareness of the dangerous and deadly risk factors associated with esophageal cancer.

Especially chronic heartburn, which is one of the most common symptoms of the primary risk factor associated with esophageal cancer. Barrett’s esophagus is a potentially precancerous condition which is caused only by the reflux of stomach acids and contents upwards into the esophagus.

This research does shed light on an important aspect of esophageal cancer.

There are cases of esophageal cancer which occur in people who do not have any of these risk factors.  These people never had acid reflux or had mild, occasional heartburn; never smoked or used any tobacco products; exercised regularly; ate a well-balance and nutritious diet; maintained a healthy weight and did not use alcohol in excess.

How will we encourage these people to get screened for a cancer that they show no risk for?

How can they reduce their risk of esophageal cancer if they are already considered not to be at risk?

The takeaway from these new claims from John Hopkins should be that there is still a dire need for funding of esophageal cancer research.  Researchers need to explore the fundamental reasons behind esophageal cancer, especially in those who show no risk.

Would you like to support these efforts and to fund esophageal cancer research?  Please click here to make a contribution in support of our mission.

This entry was posted on Tuesday, January 13th, 2015 at 1:30 pm and is filed under The Salgi Foundation - Esophageal Cancer Awareness, Early Detection & Research. You can follow any responses to this entry through the RSS 2.0 feed. Responses are currently closed, but you can trackback from your own site.